When you’re looking to upgrade the storage in your device, you’ll often run across the question, “HDD vs SSD, which should I be getting?” We’re here to help you answer that question. First we’ll have to explain the difference between the two, then we’ll explain which would be the better option for you.

To start, the main differences between Hard Disk Drives (HDD) and Solid State Drives (SSD), are going to be capacity, speeds, and price. SSD is going to be more expensive but it’s speeds aren’t achievable for any HDD. This is why most people prefer to get SSD for their PCs and Laptops, it gives them faster speeds than they previously would’ve got with a Hard Disk. Now, you’re probably asking why wouldn’t everybody just get SSD than? It’s simple, HDD owns the other two categories. With regular Hard Disks you can get a greater capacity, sometimes up to 14TB of storage. Plus, the cost is much less than a Solid State Drive.

A Hard Disk relies on a magnetic tape, along with other moving mechanical components. They’re much bulkier than a SSD, and because of the moving components are more prone to breaking down. Also, as mentioned before they have much slower speeds because of those moving parts. A Solid State Drive, is essentially flash storage. Meaning it has no moving parts, think of it as a large memory stick. Due to the size they’re sometimes even mounted directly to the motherboard in an effort to slim devices and save space. 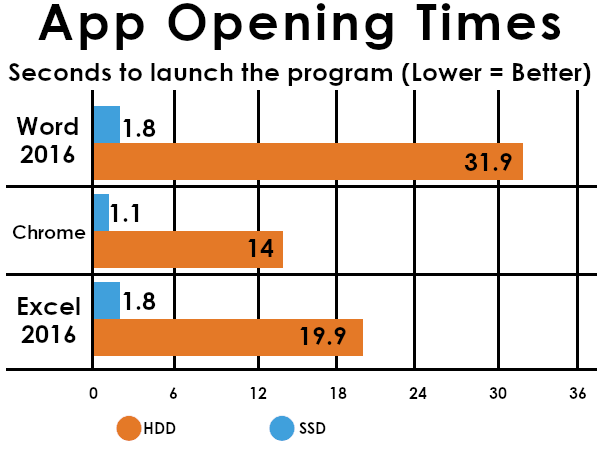 Which one should you get? It depends on what you prioritize, speed or storage? A popular trend that is happening now is to set up a raid configuration using both. You’ll be utilizing each drives strengths. Use a smaller SSD for booting up devices, creating fast boot times, without lag, and a larger HDD for your mass storage needs. However, if you don’t use up too much storage space, go for the SSD. Vice versa, if you don’t use intensive applications that drain your memory, but need extra storage go for the HDD. In this day of cloud based storage solutions, I personally would shoot for an SSD if I were to upgrade my MacBook’s storage. However, I am barely using my 1TB of HDD storage currently installed so I’d likely fall in the first group of speed over storage.

If you ever have any questions or want to discuss more on if a HDD or SSD would fit you more, we’re always here to help. Just use our contact us page or chat, when we’re available! Luckily, we have both SSD and HDD available to start your search!